May 5, 2021
ButteNews.net
The United States will issue layoff notices to some of its workers later this month, govexec.com reports. Workers were sent a memo this week, the website noted.

Town Pump reported a diesel spill  at its 3700 Harrison operation. The spill occurred an January 30. Reporter Michael Cast posted the story March 9 on the Montana Standard website. Here's the release from Town Pump.

Jan 22, 2021
ButteNews.net
President Biden has ordered an intelligence assessment of Russia's ongoing cyber war against the US Government, nextgov.com reports. 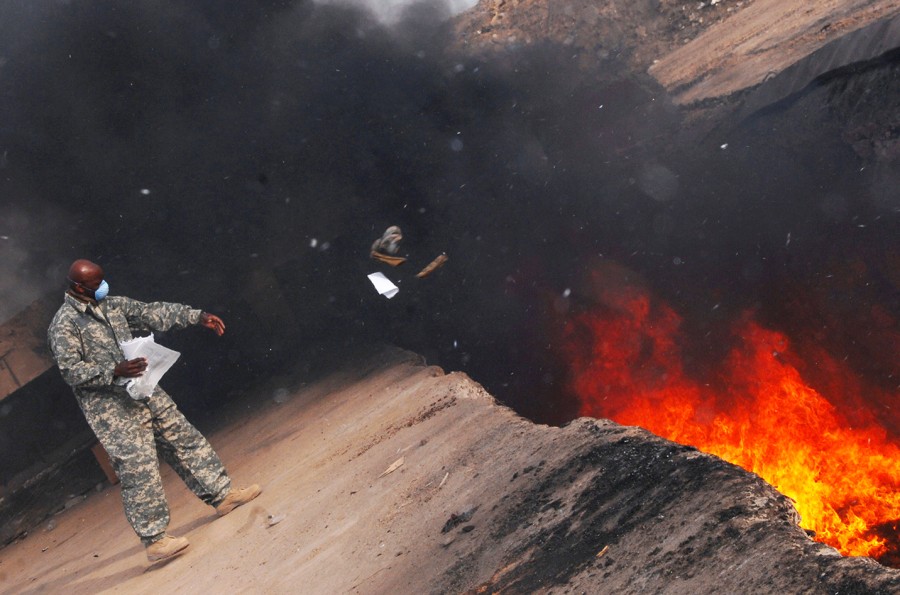 April 6, 2021The lungs Bill Thompson was born with told a gruesome, harrowing and unmistakable tale to Dr. Anthony Szema when he analyzed them and found the black spots, scarring, partially combusted jet fuel and metal inside.

The retired Army staff sergeant had suffered catastrophic lung damage from breathing incinerated waste burned in massive open-air pits and probably other irritants during his tour of duty in Iraq.

“There’s black spots that are burns, particles all over; there’s metal. It was all scarred,” said Szema, a pulmonologist and professor who studies toxic exposures and examined Thompson’s preserved lung tissue. “There was no gas exchange anywhere in that lung.”

Thompson is still alive, surviving on his second transplanted set of lungs. Yet the story burned into the veteran’s internal organs is not one that has been entirely convincing to the U.S. government.

The military has not linked the burn pits to illness. That means many who were exposed to burn pits and are sick do not qualify for benefits under any existing program.

Retirement and health benefits for members of the military depend on factors like length of service, active or reserve status, deployments to combat zones and whether the military considers specific injuries or illnesses to be service-related. Thompson has been able to get care through the Department of Veterans Affairs for his lung disease but has not been able to secure other benefits, like early retirement pay.

“I was denied my Army retirement because if it was not a combat action, then I don’t receive that retirement,” Thompson said at a Senate Veterans’ Affairs Committee hearing last week on service members’ exposures to toxic substances.

Thompson is one of at least 3.5 million veterans since 2001 who have served in war zones where the U.S. military decided to dispose of its trash by burning it, according to VA estimates.

It’s not clear how many people within that population have gotten sick from exposure. Only a small fraction — 234,000 — have enrolled in the VA’s online burn pit registry. Veterans’ advocacy groups have said the majority of claims to the agency stemming from toxic exposures are denied, even as most former service members report contacts with toxins in their deployments.

Soldiers returning from tours in the global war on terror have reported debilitating illnesses almost from its beginning, but got little traction with the military. This year, though, the likelihood of congressional action is high, with Democrats expressing interest and a president who suspects burn pits are to blame for his son’s death.

President Joe Biden’s son Beau died of brain cancer in 2015 at age 46. He had deployed to Iraq in two sites with burn pits — at Baghdad and Balad — around the same time Thompson was at Camp Striker, near the Baghdad airport.

“Because of exposure to burn pits — in my view, I can’t prove it yet — he came back with stage 4 glioblastoma,” Biden said in a 2019 speech.

In testimony at the March 10 hearing, Shane Liermann, who works for the group Disabled American Veterans, told the committee that 78% of burn pit claims are denied.

“Part of the problem is VA is not recognizing that exposure as being toxic exposures,” Liermann said.

Aleks Morosky, with the Wounded Warrior Project, said that in his group’s survey of 28,000 veterans last year, 71% said they had “definitely” been exposed to toxic substances or hazardous chemicals, and 18% said they had “probably” been exposed. Half of those people rated their health as poor or fair. Only about 16% of the service members who believed they had suffered exposure said they got treatment from the VA, and 11% said they were denied treatment.

Thompson, who is 49, said care for his lung disease is often slow and sometimes denied. It took the VA three years to approve an air purifier for his home to filter out allergens, and the VA refused to help pay for the removal of dust-trapping carpets, he said.

Thompson’s presence at the hearing, though, was not just meant to put the spotlight on the VA. The military’s entire approach to toxic exposure is a morass that leaves ill soldiers and veterans like Thompson trying to navigate a bureaucracy more labyrinthine than the Pentagon’s corridors.

After Thompson was shipped back to Fort Stewart in Georgia, his medical ordeal was at first addressed within the military system, including a year at Walter Reed National Military Medical Center in Bethesda, Maryland, where doctors found his lungs filled with titanium, magnesium, iron and silica.

Yet he said he didn’t qualify for the Army’s traumatic-injury insurance program, which might have helped him pay to retrofit his home in West Virginia. And he can’t get his military retirement pay until he’s 60.

Illustrating the problem, several officials at the hearing with the Department of Defense, the Army and the National Guard were unable to explain why Thompson — with 23 years of service between the Guard and Army — might have such a hard time qualifying for retirement benefits when the evidence of his lungs and the findings of the Army’s own doctors are so vivid and extreme.

For advocates who have been working on the problem for decades, it reminds them all too vividly of Agent Orange, which the military is still coming to grips with.

“It’s already been, since the first Persian Gulf [War] — we’re talking 30 years — and since burn pits were again active, since 2001,” said Liermann. “We’re way behind the curve here.”

Although Congress has done relatively little to deal with burn pits, many members seem to at least be thinking along the same lines. The Senate Veterans’ Affairs hearing promised to be something of a kickoff to a year when lawmakers are poised to offer a slew of bills designed to confront the military’s inability to care for service members poisoned during their deployments.

“Make no mistake about it,” said the committee chairman, Sen. Jon Tester (D-Mont.). “We hold these hearings for two reasons: to gather information for the committee members and to help educate the VA that they might take action before Congress does.”

Republicans have also shown growing interest in the problem, offering targeted bills to ensure a handful of toxin-related diseases are covered by the VA.

“We got to do a better job of taking care of our young people,” Tuberville said. “If we’re going to go to war, we got to understand we got to pay the price for it on both ends.”

There is also likely to be high-profile support and attention when revised legislation starts rolling out this spring.

The broadest bill likely to be offered was first introduced by Sen. Kirsten Gillibrand (D-N.Y.) in the Senate and Rep. Raul Ruiz (D-Calif.) in the House in late 2019, with a boost from former “Daily Show” host Jon Stewart and a cadre of 9/11 responders who are turning their attention to toxic exposures.

Indeed, Ruiz and Gillibrand’s legislation is modeled in part on the 9/11 health act that passed in 2015. The burn pit bill would remove the burden of proving a service-related connection.

It would vastly simplify the lives of people like Thompson.

“I am a warrior of the United States of America. I gave my lungs for my country,” Thompson said.

He was cut off before he could finish, but his prepared remarks concluded, “Hopefully, after hearing my story, it will bring awareness for not only me but others who are battling the same or similar injuries related to burn pit exposures from Iraq or Afghanistan.”

KHN (Kaiser Health News) is a national newsroom that produces in-depth journalism about health issues. Together with Policy Analysis and Polling, KHN is one of the three major operating programs at KFF (Kaiser Family Foundation). KFF is an endowed nonprofit organization providing information on health issues to the nation.

Montana Weather for You